The ECB is Crazy 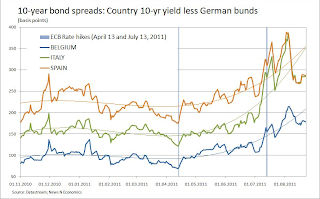 Via Matt Yglesias, FT Alphaville has a nice graphic showing how ECB rate increases -- responding to mostly temporary commodity price shocks -- have triggered the recent phase of the Euro-debt crisis. It would have been very unlikely for Italy and Spain to have gotten into trouble without the past two rate increases.

At FT Alphaville, Joseph Cotteril quips that "On the bright side, at least the ECB left more room to cut rates?" Yet, of course, the ECB has always had room to cut rates, as at no point in the past three years did the ECB's main policy rate fall below 1 percent, while Eurozone core inflation has remained below 2 percent and Eurozone GDP is still roughly 2 percent below its 2007 peak. Although it's commonly thought that Ireland, Portugal, and Greece would be in trouble regardless, one really does have to wonder what the Eurozone would look like if Lars Svennson were setting rates. Germany has an output PMI consistent with GDP growth of less than .5%. Had the ECB been targeting German GDP growth successfully at 3% over the past few years, things would look quite different. Instead, German GDP the past 4 quarters is not even 1 percent larger than the pre-crisis peak -- so of course the Euro is in crisis.

And yet, there has been very little public pressure for the ECB to change its ways.

Posted by Thorstein Veblen at 3:47 PM