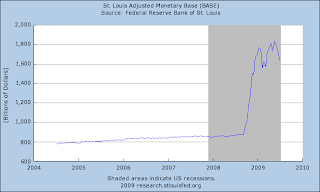 OK, Scott Sumner is completely nuts. Here he is debating Ohanian: "Last fall, deflationary policies by the Fed caused the sub-prime mortgage crisis to spread to other types of debt. Unfortunately, almost all economists misdiagnosed the problem, assuming that it was the worsening financial crisis that was reducing demand, when in fact the reverse was increasingly true — falling demand reduced asset values and weakened bank balance sheets."

But the graph of the monetary base above does not show "deflationary policies" last fall. Fed policy may not have been enough, but it was in no sense "deflationary".

Nevertheless, since last fall, there has been a slight decline in the monetary base. Here Sumner may have a point. Still though, I'm a bit confused -- I remember being taught as an undergrad that the Fed doesn't really stress the MB numbers, b/c they seem to be less important in the era of modern banking than they used to be... In the past 2-3 recessions, the MB numbers looked completely unremarkable.

I just checked my Carl Walsh Monetary Theory and Policy book -- he writes that the correlation between M1 and M2 and other economic variables basically broke down after 1982... Sumner's focus on the MB appears misguided...
Posted by Thorstein Veblen at 1:36 PM