One reason the dramatic increase in the money supply did nothing to the economy last fall is that it has all just gone into Excess Reserves -- bank reserves in excess of what the Fed requires: 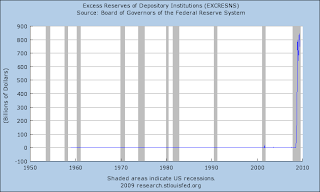 Still, I don't see why this implies that the Fed should stop/slow down on QE. The only reason is the worry that inflation will be coming just around the corner. But that just doesn't look like a rational worry at this point...

Here is the similar story in Japan (via the Cleveland Fed ; at least they can do something right). Keep in mind that 30 trillion yen is only $300 billion vs. a debt that is supposedly around $8 trillion. So Japan's QE was never actually that large, and peanuts compared to how much debt it actually could have monetized. What the Fed has already done is much larger. 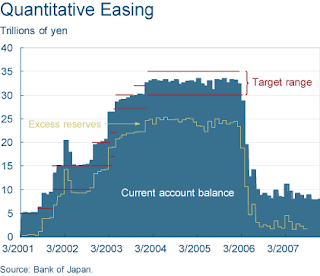 And remember this Krugman post from a few months back -- what got Japan's economy going was its trade balance...

Anywho, as you can see above, the -- I dunno if funny is the right word -- thing is that Japan's QE didn't KO its debt forever. The Bank of Japan eventually dumped all that debt back on the market. And when it did, Japan returned more-or-less immediately right back into deflation. (Apparently, BoJ officials had not read my undergraduate thesis...) 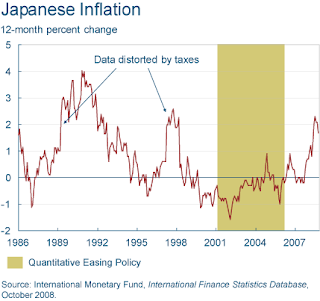 And, we can see below that while QE in Japan might have weakened the yen a bit at first, the effect was slight and short-lived. What the Japanese should have done, then, was double-down, monetize another $300 bill of debt, only retire it forever rather than just temporarily... 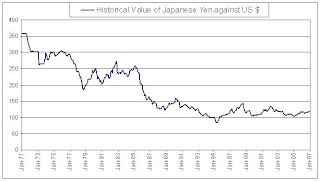 Posted by Thorstein Veblen at 7:29 PM